Photographing people in subways is a popular topic in street photography, from it’s very beginning. As a photographer you get very close to the people, and the subways of the megacities are almost the essence of all ethnicities and social classes of the specific town. Actually, during our stay in Paris, there was an Walker Evans exhibition in the Centre Pompidou, which showed almost identically framed portraits of people, sitting in the New Yorker Subway. Evans took them in the 1930’s with a camera, he hid under his coat. Well, my camera was quite obvious resting in my hands. I guess, that’s not the only reason why these street portraits are far less impressive. BUT. At least to me, the Paris Métro is the most beautiful subway system in the world, and the variety and (often enough) elegance of it’s guests second to none. By the way:  In 2016, le métro  has been ranked as the best public transport system in the world with 100 percent of people in the city of Paris having an easy access to rapid transportation. 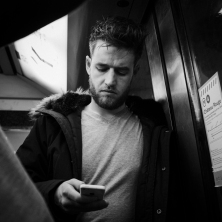