Sunday noon. We were alone in Kolumba (Cologne) one of the most beautiful museums, created by the famous Swiss architect Peter Zumthor. I brought my Leica M2 with me, together with a Summicron 35mm lens: Inside the camera: a rather cheap roll of Agfa APX 100. Sometimes I wonder, why still bother shooting film? But when I see these pictures – although scanned with a rather mediocre Epson V800 Flatbed Scanner and scanned by a less than mediocre user (meaning myself)-  I think I know, why. The way the light flows like milk through the curtains and windows, the soft glow of the scene – I couldn’t replicate that look in a digital way. I am sure many others could. I couldn’t. And there is something else: Sometimes it’s just beautiful to see how the shortcomings of a very old system (in this case the low ISO/ASA performance of the film) turn into technically minor pictures, which are even more beautiful, because they are blurry (sometimes I had to shoot handhold at 1/8 of a second) or show other ‚mistakes‘. And then I think: they are beautiful for me, because they are not perfect in a technical sense. Sounds rather sentimental and Wabi-sabi, I know, but these are my feelings anyway. Feel free to leave a comment if you don’t share that opinion. Or have similar experiences with shooting film. 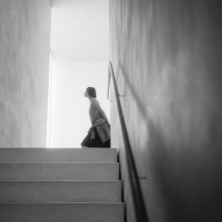 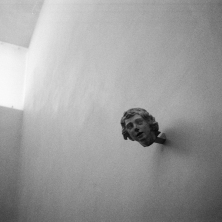